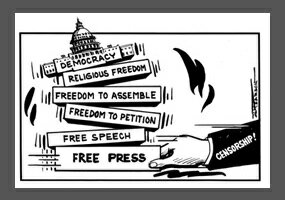 Freedom of the press definition, as quoted from dictionary.com, is “The right to circulate opinions in print without censorship by the government. Americans enjoy freedom of the press under the First Amendment to the Constitution.”

Our liberty depends on the freedom of the press, and that cannot be limited without being lost. ~Thomas Jefferson

I am… for freedom of the press, and against all violations of the Constitution to silence by force and not by reason the complaints or criticisms, just or unjust, of our citizens against the conduct of their agents. ~Thomas Jefferson

No government ought to be without censors; and where the press is not free no one ever will. ~Thomas Jefferson

No government ought to be without censors; and where the press is not free no one ever will. Thomas Jefferson

Whoever would overthrow the liberty of a nation must begin by subduing the freeness of speech. ~Benjamin Franklin

“When the public’s right to know is threatened, and when the rights of free speech and free press are at risk, all of the other liberties we hold dear are endangered.” – Christopher Dodd

“The liberty of the press is essential to the security of the state.” – John Adams

I think that a good number of our elected officials need to be reminded of what the Founding Fathers wrote about Freedom of the Press and why it is necessary. As the attack on freedom of the press and free speech becomes worldwide, people often forget what their rights are as a free people and why those rights are so important.

When the Constitution and the Bill of Rights was written, the United States had just fought and won a war against tyranny. The Founding Fathers wanted the citizens of their new country to be as free as possible. They knew how important the 1st amendment was in keeping people from falling under an oppressive state of government because they experienced it first hand.

Once you remove the ability of the press to publish in the public interest, citizens of that country can no longer hold their government accountable.

In a democracy or republic, the people own their government, not the other way around. Once people no longer have the ability to acquire much needed knowledge, they become fools.

Regardless of if you agree with what a media organization states or shows, it is their right under the Constitution to do so. It is important to hear various opinions in order to form our own. How can you vote for a candidate if there are no facts being circulated about what they stand for? How we can validate what is going on in the world if there is only controlled propaganda available as a resource?

The battle about press freedom has waged for many centuries but seems to be becoming a losing battle for those who support it more recently.

The US owes its existence in part to a free press. “Some of the most important voices before and during the American Revolution were anonymous pamphleteers who were writing under pseudonyms, talking about the crimes of the British government,” Timm says. Speeches, pamphlets and newspapers were critical in informing and galvanizing public support for the revolt. And because a free press was so pivotal in their efforts to overthrow British rule, the Founding Fathers decided to protect that right with the First Amendment, ratified in 1791.

But the rights protected by the First Amendment have never been absolute. US history has been marked by an ongoing conflict between the government’s attempts to strengthen and protect itself and the press’s attempts to scrutinize and report on the government. Along the way, the US government has scored some key victories in stifling the press. The Sedition Act of 1798 made it criminal to criticize high-ranking government officials; anti-war activists during WWI were jailed; and FDR created an Office of Censorship during WWII in an attempt to control the media narrative around the war effort. However, a number of Supreme Court cases in the 20th century were able to establish robust legal protections for the press. These cases include Near vs. Minnesota (1931), which held that it was largely unconstitutional for a government to censor the press, and New York Times v. United States (1971), which ruled that the Nixon Administration could not use vague pronouncements of “national security” to censor the publication of the Pentagon Papers.

How many times in history has it been the press that informed people of the disgusting behavoir of their elected leaders? It is true that oftentimes the media is responsible for starting wars, destroying organizations and people, but it is necessary to be free and simply know.

The recent arrest of Julian Assange will set a precedent against the First amendment that we will never recover from. Any journalist worldwide who covers military movement, elections or the efforts of the U.S. government to influence politics in other countries, can be arrested under the Espionage Act if Assange is convicted. This precedent will end press freedom and many of our rights as individuals.

The First Amendment was put in place to protect us. The DOJ is attacking our rights not just Assange. Lack of free press will end up in a tyrannical government. Our soldiers have not served and died to see this take place!

It is easy to ignore what is happening if you feel it doesn’t affect you, but the attacks on press freedom ARE attacks on you and everyrhing we stand for. If you allow this to happen, our generation will be the last to know freedom.