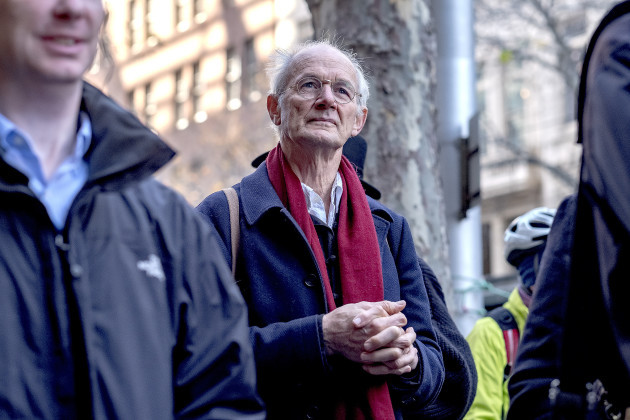 Speaking to reporters afterwards outside, Mr Shipton said his son had his prison cell searched and demanded he be released on bail

“Bail ought to be given immediately if the extradition order isn’t dropped.

Julian had a harassment today. He goes to court tomorrow. They searched his cell this afternoon just before he came down to see us.

“This plague of malice that emanates from the Crown Prosecution Service to Julian Assange must stop immediately.”

Mr Shipton was accompanied on his visit by Greek economist Yanis Varoufakis, with both met by representatives from Reporters Without Borders as they left the prison.

The continued torture of Assange has relented little in the 9 months since his arrest as they are still keeping him in his cell over 20 hours a day.  Solitary confinement, as in the case of Assange, is considered torture after 15 days.  Assange has spent most of his incarceration in solitary.  The treatment of Assange is a disgusting display of what Belmarsh stands for.

Also in an article by the Evening Standard seen here:

A murder inquiry has been launched after an inmate was battered to death inside top-security Belmarsh prison.

Officers were called to reports of an assault at 8pm on Tuesday. Police and paramedics arrived at the category A men’s jail to find the 36-year-old man with head injuries.

He was rushed to hospital in a critical condition but medics were not able to save him and he died the following evening.

There is no indication that the attack was terrorist-related.

Why is the British justice department keeping a journalist with no record or history of any kind of violence in its highest security prison in the first place?  This is dangerous and unsafe for Assange who is only being held to be extradited.  Keeping him in such a prison is vile and torturous.  The U.K. Crown Prosecution Service should be removed and replaced with more qualified people who take into consideration justice.  What is being done to Assange is beyond description.  He simply published documents and a video given to him like any other news organization.  Why hasn’t the Guardian or the New York Times publishers been arrested as they published the information before Wikileaks had a chance to redact it?

The whole case is biased and prejudice beyond comprehension.  One person against an empire who has had 10 years to prepare its case while stealing any data Assange kept in the Embassy.  Unfair and cruel are just a few words that come to mind.  The government overreach, in this case, is abominable and will effect journalism for years to come putting journalists in the line of fire by a corrupt government who intends to silence them.

All Julian wants is justice and so do his supporters.  When will this travesty end?