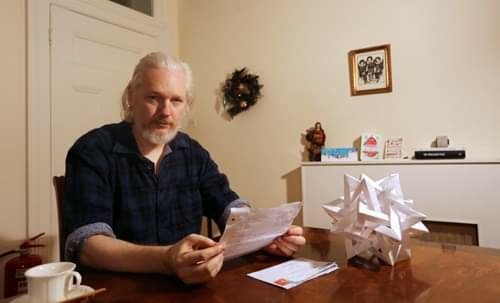 In this article, I intend to show you exactly why Assange should not be extradited to the U.S. to face espionage charges resulting in 175 years in prison or the death penalty.

1. According to WSWs.org, (article seen here):

The Morales case has major implications for the US extradition attempt. UC Global was contracted by the Ecuadorian government to provide security for its embassy in London, where Assange sought and was granted political asylum in June 2012. Instead of protecting Assange, Morales’s company is known to have illegally monitored and recorded every aspect of his personal life from 2015 until March 2018. Investigations published by Spanish newspaper El Pais and Italian newspaper La Repubblica have uncovered evidence that leaves little doubt the surveillance was carried out on behalf of the US Central Intelligence Agency (CIA).
Assange’s British lawyers made clear again yesterday that they intend to use the evidence arising from the UC Global case to argue that the extradition application should be rejected out-of-hand, as it further proves he will not receive a fair trial in the US. A major precedent was set in the 1970s, when the case against Pentagon Papers whistleblower Daniel Ellsberg was quashed following the revelation that President Richard Nixon had overseen spying on consultations between Ellsberg and his doctors.

This obviously shows there is no possible justice to be found in the U.S.

2. Julian Assange’s case is political. In an article that I wrote in June of 2018, I explain with links backing my thoughts why the U.K. cannot legally extradite Assange. You can view the article in its entirety here.

Another defense available to Assange—and perhaps his most formidable one—will be to assert that he is being charged with a political offense. If that assertion is deemed correct, it could block his extradition, because, like many extradition agreements, the US-UK treaty forbids any transfer based on such charges. The categorical prohibition under Article 4 of the treaty could not be clearer: “Extradition shall not be granted if the offense for which extradition is requested is a political offense.”

But what is a political offense? Transgressions such as espionage, sedition, and treason are what are known as “pure” political offenses, including under UK law—that is to say, activities that directly target the state but that would not necessarily be criminal in other contexts. A related category, known as “relative” political offenses, covers common crimes that are incidental to purely political activities. Because various jurisdictions have interpreted the expansiveness of this political exception differently over time, a universal definition of a relative political offense is difficult to articulate, but the basic principle of the political exception in extradition has remained unchanged since its origins in the late nineteenth century. It states, in brief, that nations should not return political opponents to face prosecution for challenging the states that would sit in judgement of them.

3. Another reason is the fact that after being examined by doctors and psychologists according to Nils Melzer, special rapporteur on torture from the UN, Julian shows all the signs of prolonged torture. His health is also deteriorating rapidly. By extraditing him, they are sentencing him to death as I believe the process itself may kill him.

4. But most important of all. Julian Assange never did anything illegal. He simply published material given to him by an outside source. The real reason the United States government wants this is two reasons. One, they want vengeance for being embarrassed. Two, they want to be able to set a precedent to prevent journalists worldwide from sharing the truth of their hidden criminal activity. If they convict Assange, they can arrest any journalist.

It appears that the U.K. justice system is waking up to this case being about more than simply Julian Assange as his British lawyers have submitted over 40,000 pages of evidence and expect the hearing to last 4 weeks.

There is another facet of this case that gives reason for Assange not to be extradited. The United States is well known for torturing people. Take the case of Chelsea manning who was it in solitary confinement for over a year, paraded naked in front of his peers and locked in a cold cell. Other cases have been recorded as well.

Very simply, if the British courts fail to be just in this case, Assange will die a martyr at their hands as well as the U.S. government’s. We must hold them accountable for their actions by writing the courts especially Vanessa Baraitser.