The Courage Foundation recently posted an update which I will share below. Even though Assange has served his time in the U.K. for his bail charge, he is still in the same cell, getting the same treatment and living in hell. 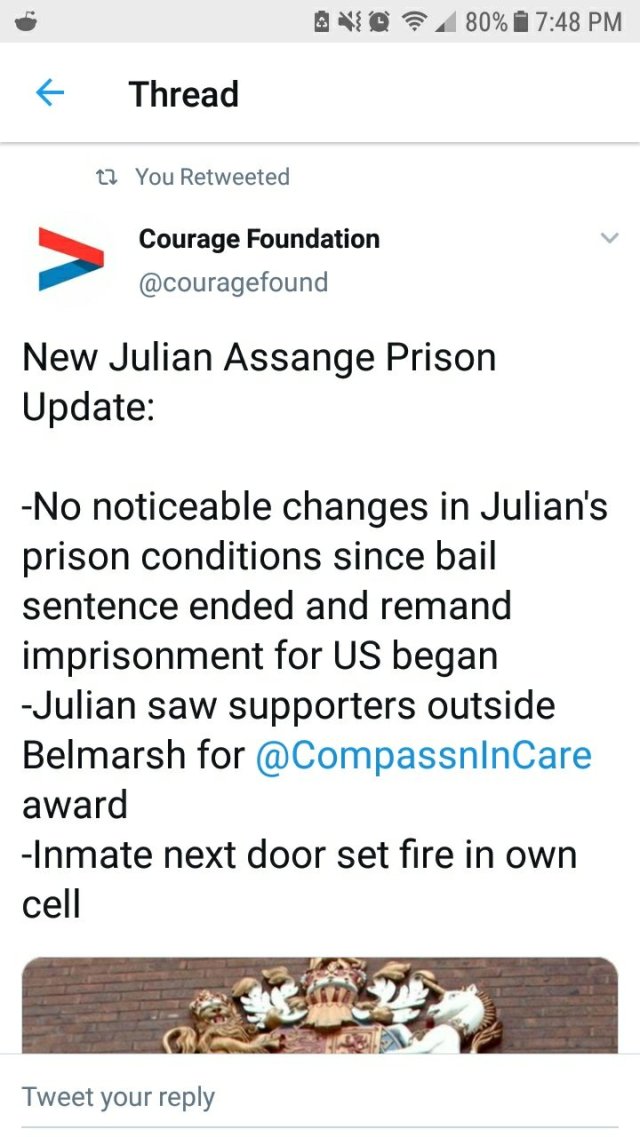 As though living in tortured hell is not enough, the prisoner next door set fire to his cell and was returned to that same cell. Julian is already living in fear of what is to come, he shouldn’t have to fear for his life from his prison mates. According to the article The Courage Foundation posted on defend.wikileaks.org seen here:

On Saturday, 28 September, supporters gathered outside Belmarsh as Eileen Chubb presented Assange with the 2019 Gavin MacFadyen Award, jointly given by Compassion in Care and the Whistler and accepted by Julian’s father John Shipton on Julian’s behalf. When Julian was moved from his cell through prison corridors to the exercise yard that day, he was able to see the protesters from afar, saying he saw hundreds of supporters outside. In his limited interactions with others, he was told that guards and other prisoners had heard heard the protest as well. But when Julian’s exercise time ended, prison guards took him back to his cell by a different route, one they’ve never used in the past for such moves, so that he couldn’t see the supporters as he walked. 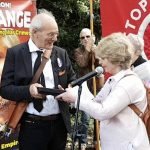 Also in the article was the following:

On Sunday, 29 September, a man in the cell next door to Julian in Belmarsh’s health ward was apparently driven to desperation. The prisoner set fire to or in his own cell, sending smoke into the corridors and into the nearby cells. A day later, the inmate is back in the same cell.

Assange’s next administrative hearing is scheduled for 11 October 2019 at Westminster Magistrates’ Court.

Assange is an innocent man, guilty of nothing but publishing uncomfortable truths about the way the United States ignores our rights and international law when waging war. He deserves to be free and compensated for the torturous treatment he has received and is receiving. He should be a free man.

One thought on “Assange Update”