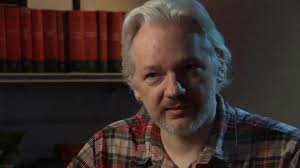 Julian Assange was mocked for his beard when he was arrested April 11th as it had grown very long. UN Special Rapporteur Nils Melzer explained that upon talking to Assange, Julian explained his shaving kit had been taken from him 3 months earlier. (See screenshot of Tweet below).

As if 8 months of solitary confinement and releasing videos meant to humiliate Assange were not enough for Ecuador to be satisfied, they took his shaving kit to further make his life difficult. Ecuador used Assange like an expensive bait to hook and reel in the 4.6 billion dollar IMF loan they received shortly after Assange’s arrest. It was the biggest case of “human-trafficking” ever.

It is hard to say what else Assange went through in the Ecuadorian Embassy in London. Rumors circulated that he went without food and heat. Ecuador’s government is guilty of torturing this award-winning journalist and Nobel Peace Prize Nominee and also of the demise of his health.

Please help support Assange’s legal fund to help him fight against extradition to the U.S. at defend.wikileaks.org/donate.