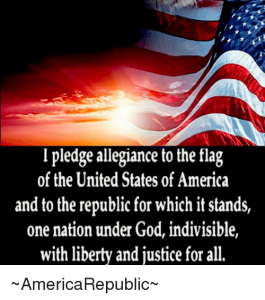 Somewhere along the line people confused being a patriot and putting America first with ignoring the rights of the rest of the world. They have begun to think that only US citizens have rights and its okay for our country to ignore international law. I am pretty sure you can blame this attitude on media and many politicians.

The definition of patriot is as follows:
person who vigorously supports their country and is prepared to defend it against enemies or detractors.

Nowhere in this definition does being a patriot mean you ignore the rights of foreigners. Everyone in this world has rights as individuals. You can love your country and still support international law.

International law is not the same as NWO or a world government like many think. It is a set of laws formed by the Geneva convention to protect us from lawlessness and cruel governments that target citizens like the NAZIs did in Germany.

According to legal career path:

When a country violates these laws, it enables other countries to go in and enforce them. It also sets up a legal way for special legal authorities to assess human rights violations. When US citizens assume that people of other countries do not have rights here they are wrong.

Not just here in the US, but everywhere. So stop thinking America first makes you better or gives you rights no one else deserves! Thinking that way shows a lack of empathy and compassion. We need more love in this world, not hate!