I remember when you saw a title like “The Torture of a Journalist” and you thought it happened in the Mideast or maybe China but in today’s harsh world it is happening in the heart of London. Nearby is Harrod’s Department Store in Knightsbridge, but inside the Ecuadorian Embassy, a journalist named Julian Assange is held captive by the British government without charge. As though it is not enough he has been without fresh air, sunlight/Vitamin D for 6 years, he has now been held in solitary confinement for 8 months and recently a 10-page provision has been written by Ecuador who gave him political asylum in the first place.

By giving Mr. Assange asylum, the country of Ecuador gave a vow to protect him indefinitely. In DeDeceDecemDecembDecembet of 2017, they went so far as to make him a citizen and named him a diplomat. Nonetheless, their President, Lenin Moreno, isolated Assange without phone, internet access. or visitors because of political statements he made on Twitter as a journalist. Recently, due to the 10-page document and the regulations within, Assange must have his lawyers bring him his food. Ecuador over the last weekend had a holiday and would not allow his lawyers to visit, so he was denied food over the weekend. According to the article seen here, Julian’s lawyer Carlos Poveda states:

“Poveda said that they are still questioning the protocol that he wants to apply to Assange in the Ecuadorian embassy. He reported that the last holiday was closed and this supposedly hurt his client in basic issues such as food.” 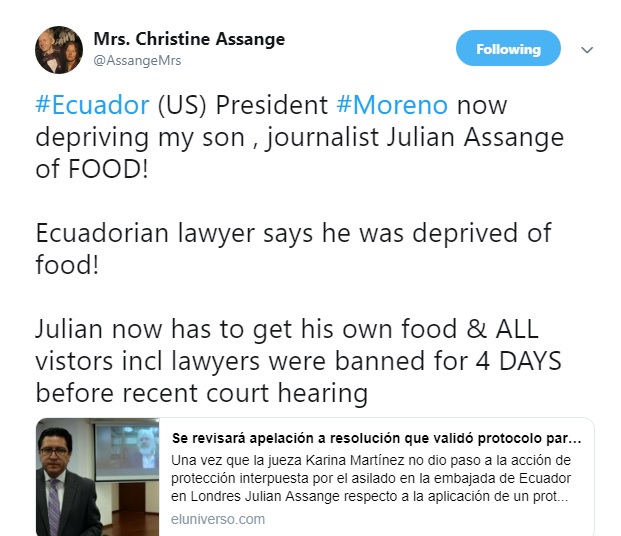 If Ecuador calls itself a democracy, and Lenin is just a president, why would they go so far as to deny him much needed nutrition?

Not only has Ecuador denied him food, but according to this article seen here they have replaced former staff with new that are attempting to provoke Assange into an argument which they can use to expel him from the embassy. His lawyer Carlos Poveda states in the above article:

“They changed diplomatic personnel in London since last Monday. An official, just Assange left the audience, said: “I invite you to a coffee at Hard Rock.” Was it sarcastic? Assange begins to have countless provocations. This is going to accelerate. “

When asked what will accelerate, Poveda stated:

“That the asylum be terminated. The conditions are extremely sensitive, complex, of an unusual pressure. We filed a protective action and they said that the State was separating from the relationship with Assange, that miracles are not done and that it is our problem. They throw the ball. The Attorney General (Íñigo Salvador) said that any situation that occurs will be observing the rules of conduct of the protocol and that this is the protection of the State before any international responsibility.”

The hostility towards Assange is not unusual for President Lenin Moreno as he placed his former VP in high-security prison on a charge of fraud which in itself was fraudulent. Former VP Jorge Glas went on hunger strike and as health has deteriorated was transported to the hospital. His wife and children were not allowed to see him while he was there and Jorge Glas was returned to prison without the care he needed. In all likelihood, Glas was die in solitary confinement.

As Assange and his lawyers have filed a lawsuit against Ecuador for violations of his human rights, another item has come up. Moreno has named his choice to the Constitutional Assembly which will hear the Assange lawsuit. Hopefully, they take this protocol before the InterAmerican Court and let them decide instead as it is obvious this will be a biased court decision. You can read about Moreno’s choices to the Assembly here.

As a people who care about our free speech and human rights as individuals, we must stand up against this wicked, cruel act which has been instigated by none other than the US government who put pressure on the Ecuadorian government to turn over Assange this year. How can we as human beings stand and watch a man who exposed injustice all over the world from governments and corporations deteriorate and be tortured for it?

Julian’s mother, Christine Assange, recently put out a plea for her son. The transcript is below:

You can also listen to it here.

The truth is folks, by overlooking this horrific atrocity being done to an innocent man, we are as guilty as those who are administering it. We cannot let this go on. We must protest, write letters to our leaders, and end what is an act against all humanity. Please, please answer Mrs. Assange’s plea to act immediately to free her son from this barbaric situation.

One thought on “The Torture of a Journalist: Why Assange Needs to Be Freed Now”