On March 28th, 2018, after commenting on Spain’s treatment of Catalonia and Assange reporting on Trump’s role in Yemen, Ecuador’s current President Lenin Moreno cut off Julian’s connections to the world.  He took away his rights to internet access, phone access and visitors.  This included the ability to speak to his own family and children.  Some have speculated why and I did my best to explain who was really behind the silencing of Assange in my article seen here.  I show how the US is responsible through coercion mainly members of the Trump administration.  However, regardless of who pressured Moreno to do it, the gagging of Julian Assange is against his fundamental rights and freedom.

Ecuador has violated Assange’s fundamental rights by isolating him for 7 months and issuing a ten-page outrageous restrictions statement that is unrealistic and prison-like while claiming they are going to reconnect him.  Amongst those demands are his ability to have visitors, how he uses the internet, devices used in the Embassy and his cat.  Most of the regulations put in place involve the loss of asylum if violated.  Basically, if Julian so much as leaves an item of clothing on the floor he can be evicted which would lead to extradition to the US and possibly the death penalty.  More than just normal rules, these conditions are more than infringements on Assange’s rights but are against international laws concerning asylum.

According to brittanica.com on asylum:

“The right of asylum falls into three basic categories: territorial, extraterritorial, and neutral. Territorial asylum is granted within the territorial bounds of the state offering asylum and is an exception to the practice of extradition. It is designed and employed primarily for the protection of persons accused of political offenses such as treason, desertion, sedition, and espionage.”

According to Wikipedia, international law covers the right to free speech:

“Freedom of expression is recognized as a human right under article 19 of the Universal Declaration of Human Rights (UDHR) and recognized in international human rights law in the International Covenant on Civil and Political Rights (ICCPR). Article 19 of the UDHR states that “everyone shall have the right to hold opinions without interference” and “everyone shall have the right to freedom of expression; this right shall include freedom to seek, receive and impart information and ideas of all kinds, regardless of frontiers, either orally, in writing or in print, in the form of art, or through any other media of his choice”.”

THe UN Nelson Mandela Act states (according to solitaryconfinement.org) the following:

“Rule 43
1. In no circumstances may restrictions or disciplinary sanctions amount to
torture or other cruel, inhuman or degrading treatment or punishment. The following
practices, in particular, shall be prohibited:
(a) Indefinite solitary confinement;
(b) Prolonged solitary confinement;
(c) Placement of a prisoner in a dark or constantly lit cell;
(d) Corporal punishment or the reduction of a prisoner’s diet or drinking
water;
(e) Collective punishment.
2. Instruments of restraint shall never be applied as a sanction for disciplinary
offences.
3. Disciplinary sanctions or restrictive measures shall not include the prohibition
of family contact. The means of family contact may only be restricted for a limited
time period and as strictly required for the maintenance of security and order.
Rule 44
For the purpose of these rules, solitary confinement shall refer to the confinement of
prisoners for 22 hours or more a day without meaningful human contact. Prolonged
solitary confinement shall refer to solitary confinement for a time period in excess
of 15 consecutive days.”

By placing Assange in solitary confinement for 7 months so far, Moreno has committed an illegal act according to the UN and the International Law for Human Rights.  He also has violated Ecuador’s Constitution by failing to comply with the following:

Moreno has threatened to evict Assange which would allow for the UK to arrest him and extradite him to the US to face charges of espionage and theft of government property.  If you read Article 79 above, since Assange was granted citizenship in December of 2018, they cannot evict him because of the extradition.  Article 41 guarantees a political asylee the guarantee to practice the full exercise of their rights which includes free speech.

This week it was announced that Assange and his lawyer Garcon would be suing Ecuador for the violation of his fundamental rights which is his absolute right as a citizen and asylee.  If Ecuador’s judicial process is even slightly just, it will rule in his favor due to the obvious failure to comply with it’s own Constitution.  However, Moreno does not have a history of following protocol and has shown himself to be more of a dictator than a President as seen in my article seen here. 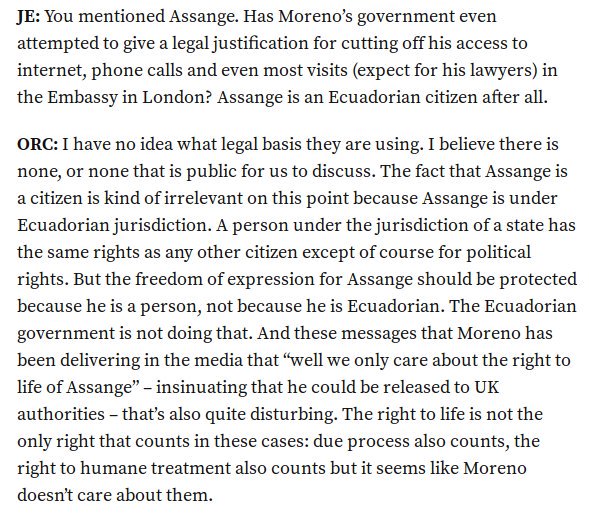 In a tweet by Wikileaks Twitter account, the above was released.  It has become pointedly self-evident that Moreno is not a man to follow laws pertaining to human rights.  His attempts to rid himself of Assange which he called “a stone in his shoe” is blatantly a political attack on an innocent man.  Julian Assange deserves justice.  He deserves to have his rights reinstated.  He deserves retribution for the damage done in the last 7 months.  May God be with him and may he see justice served!

His recent treatment, as well as his 8 year detainment against 2 UN rulings, is a disgusting show of abuse by the US government and the UK.  His lack of proper medical care is also against his rights as a human being.  Therefore, the manner in which he has been treated is inhumane and cruel and unusual punishment.