Recently the Freedom of the Press Foundation announced it would no longer be taking WikiLeaks donations and redistributing to them.  Julian helped found this organization in  2012 in response to the banking blockade imposed by the likes of Visa, PayPal, etc on the publishing agency in response to documentation released at the time.  This is a statement regarding the FPF’s decision by Assange. 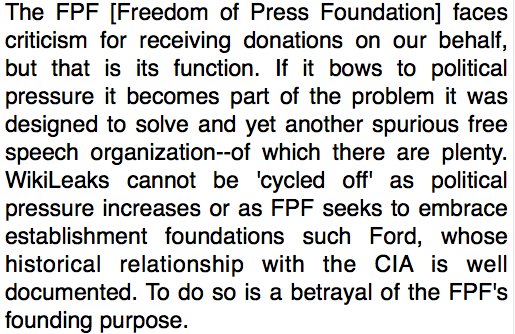 The statement released by the FPF in the Washington Times article Wikileaks Loses Support is as follows:

“FPF’s board unanimously found — upon review of the available evidence — that the financial blockade by the major payment processors is no longer in effect, and as such, we will soon cease processing donations on behalf of WikiLeaks readers,” Trevor Timm, the foundation’s director, wrote in a Dec. 9 email to WikiLeaks publisher Julian Assange.

In my firm opinion, FPF has bowed to political pressure and we should no longer support any of its functions.  They are traitors to their cause and to their founder.  Snowden is on the board and refuses to comment on this catastrophe.  After January 1st, they will no longer be a funnel for Wikileaks.

Another quote from the Washington Times:

“The pressure against WikiLeaks, its staff and its allies has increased as a result of our CIA and Democratic party publications,” Mr. Assange wrote in the email.

“The FPF faces criticism for receiving donations on our behalf, but that is its function,” wrote Mr. Assange. “If it bows to political pressure it becomes part of the problem it was designed to solve and yet another spurious free speech organization—of which there are plenty.”

Regardless, this is just another attempt by the Deep State, CIA and our lovely Congress to destroy a media organization that should be protected by the First Amendment under free press.  I personally find this violation of my rights revolting and think it is time something is done by “We The People” to end this persecution.  Stand with myself and other supporters by boycotting the Freedom of the Press Foundation. 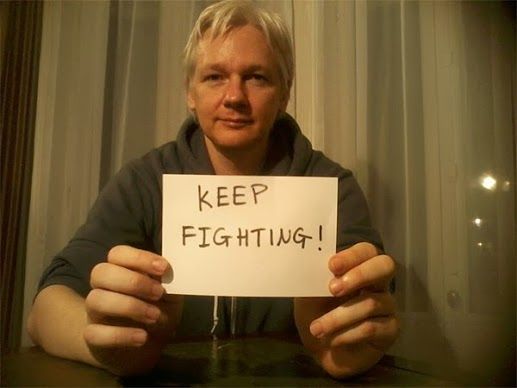