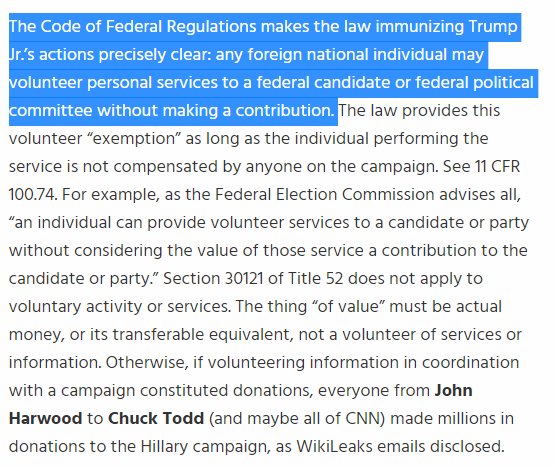 From the New York Times:

“The June 3, 2016, email sent to Donald Trump Jr. could hardly have been more explicit: One of his father’s former Russian business partners had been contacted by a senior Russian government official and was offering to provide the Trump campaign with dirt on Hillary Clinton.”

SO Donald Trump met with this “Russian lawyer” and she gave him nothing. This was clearly a set up to make him look bad right?

Fact: Any person involved in a campaign looks for dirt on the opposition regardless.  This whole thing is much ado about nothing.  I guess I am guilty of Russian collusion as well as I have spoken to a Russian at the gas station several times.  I have worked with Russians.  I guess that makes anyone who has ever talked to a Russian guilty and a spy.

They have also accused Wikileaks and Julian Assange of working for the Russians.  Last year they tried to set up Julian Assange through a dating site so they could accuse him of taking a million dollars from Russia. It didn’t work.

The whole Russian narrative is getting so old it’s become an antique. No one wants to hear this garbage before but the NY Times, the Washington Post and CNN won’t let it go. They are butthurt because Trump has called them out on their lies.  They continue to seek vengeance against the Trump administration in the name of journalism only to be proven wrong again and again..

It is time the Mainstream Media stops with it’s anti_Trump agenda and actually reports the news or they will go down in flames. You can no longer trust a word they say…